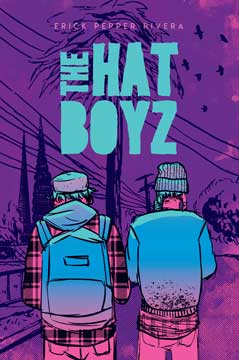 Benny, a half black, half Mexican teenager, is awaiting a letter from the court to find out if he’ll be sent to an affluent neighborhood to live with his father. But before the letter arrives, he’s extorted by his mother’s boyfriend. Now he has to sell drugs to keep his addicted mother out of prostitution. The only thing is, he doesn’t know how. Only his street-smart Chicano friend Indie can help out. To finish the job, the two attend a backyard punk show in South Central LA. But when things go wrong, Benny comes face to face with the LAPD in an uncompromising situation.

Written by a Watts native, The Hat Boyz explores the world of a naïve young man growing up in America and the relationship of a historically underserved community with the police.

Erick Pepper Rivera is a composer and cartoonist. As a Watts native, his work often explores the relationship between art and society. Rivera is a member of the Los Angeles-based collective The Tables which produces music videos, infomercials, comics, short films, and a podcast. He graduated with a BFA from the California Institute of the Arts. Erick currently writes music for picture and draws comics/zines in Los Angeles, where he lives with his wife and lazy dog.