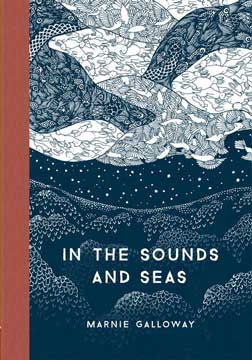 In the Sounds and Seas

IN THE SOUNDS AND SEAS, a wordless comic characterized by poetic investigations in to mythology and the quest for meaning-making, brought to life by the mesmerizingly patterned ink illustrations of award-winning author Marnie Galloway. In the style of epic poems of myth and monsters, IN THE SOUNDS AND SEAS opens with a creation myth: three figures sit around a fire in the woods and burst in to song, and their voices weave and blend together to make the ocean and the world. Within this new world the boundary between truth and fiction, fantasy and reality, are blurred. The protagonist lives in this “sung” landscape where she builds a ship to sail and find the legendary singers of their world, with the help of two others who are less haunted by her mission. It is a story about obsessive creative production, the search for creative community and meaning through art, and what happens when dreams we invest our whole selves in to fail.

Marnie Galloway is a comic artist and illustrator working in Chicago, Illinois. She was born in Austin, Texas and studied philosophy and symbolic logic at Smith College. Galloway's comics have appeared in numerous anthologies and magazines, including Saveur Magazine, Cricket Magazine, and the 826CHI Compendium. While she has published shorter works, In the Sounds and Seas is her first graphic novel.

An interview with Marnie Galloway