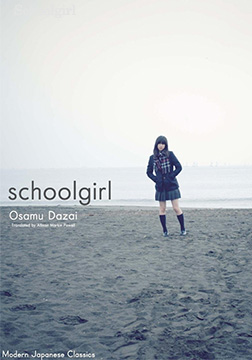 The novella that first propelled Dazai into the literary elite of post-war Japan. Essentially the start of Dazai's career, Schoolgirl gained notoriety for its ironic and inventive use of language. Now it illuminates the prevalent social structures of a lost time, as well as the struggle of the individual against them--a theme that occupied Dazai's life both personally and professionally. This new translation preserves the playful language of the original and offers the reader a new window into the mind of one of the greatest Japanese authors of the 20th century.

Osamu Dazai (1909-1948) is one of the most highly respected author's of modern Japan and is widely regarded as one of the most important figures in post-war Japanese literature. He was widely known by contemporaries for his eclectic lifestyle, inventive use of language, and his multiple suicide attempts, which led to his final, successful attempt in 1948. His two major novels, No Longer Human and The Setting Sun, continue to be widely read and leave a vibrant legacy for one of Japan's greatest writers.