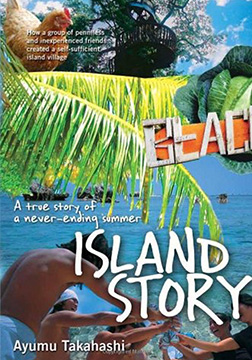 ISLAND STORY A TRUE TALE OF A NEVER-ENDING SUMMER

After returning from a two-year trip around the world, chronicled in Love and Free, Ayumu Takahashi was up for another adventure. This time it would happen right in his own back yard, the southern islands of Okinawa, Japan. Here he suddenly came up with an idea that would change his life. He would build a self sustaining island village, a place where all are welcome to stay and enjoy the beautiful tropical surroundings. But it turned out to be no easy task. Combating opposition with a lot of hard work, Ayumu and his companions must overcome all kinds of obstacles to create their little piece of paradise. Island Story is a photographic record of his eight year long quest to create a new green living environment.

Ayumu Takahashi, at the age of twenty, inspired by the movie Cocktail, dropped out of college and together with friends opened, Rockwells, an American style bar. In two years he expanded his one bar to four. At twenty-three, in order to publish his autobiography, again together with friends, he established his own publishing company, Sanctuary Publishing, Inc. Here he produced a number of hit books and his autobiography, Everyday is an Adventure, became a best seller. He was married at twenty-six and just three days after his wedding, relinquished the title of president to set out on a journey around the world with his new bride. Approximately two years later, after having roamed thirty some countries, he returned home. In December 2000, he and his wife settled in Okinawa. Presently, he is the president of four of his own companies: A-works, Inc., a book and magazine publishing and producing factory, Play Earth, Inc., an international cafe and guesthouse developer, Island Project, Inc., a self sustaining Okinawa island village producer, and One Peace Books, an international seller of his works. As a father of two he still continues to take adventures around the world.