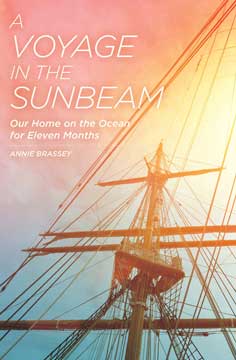 A Voyage in the Sunbeam: Our Home on the Ocean for Eleven Months

On July 1st, 1876, Annie Brassey set out on a voyage around the world-the first to be accomplished in a steam-powered yacht-with her husband and four children, two dogs, three birds, a "charming" Persian kitten (who disappeared early on into the trip), and thirty-seven crew members.
A Voyage in the Sunbeam, originally published in 1878, is a collection of Ms. Brassey's journal entries from this nearly year-long seafaring adventure. A best seller in its day, with its delightful and detailed descriptions of ship life and exotic locales, this book is guaranteed to take you on an unforgettable journey.

Annie (Allnut) Brassey (1839-1887) was an English adventurer, writer, and humanitarian. She was married to Thomas Brassey, a British railroad heir and MP. Her granddaughter, Idina Sackville, was the subject of Frances Osborne's best-selling biography, The Bolter (Knopf, 2009). Ms. Brassey died at the age of 48 of malaria while at sea.