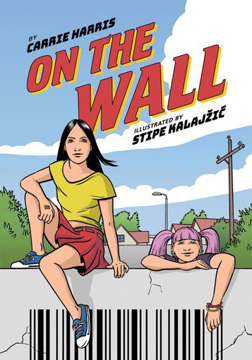 Mirror, mirror on the wall. Who’s the biggest loser of them all? Mira Mason has the world’s most useless superpower: she can pass through shiny objects. As far as powers go, it’s super-lame. Being a teenager is tough enough without throwing a useless power into the mix. The world is afraid of supes, but it’s silly to be scared of a girl who can phase through a salad fork with the greatest of ease. All Mira wants to do is put the resident mean girl in her place, get her powers teacher off her back, and convince her crush with the mesmerizing eyes that she exists. But someone with a power like Mira’s is popping out of mirrors to spy on local girls like a total creeper. Mira just wants to be normal, but sometimes a girl and her superpowered friends have to make a stand. Superheroes meet teen drama in this exciting new graphic novel written by Carrie Harris and drawn by Stipe Kalajžić.

Carrie Harris is an author and game designer by day and wannabe superhero by night. When there are no words to write or villains to defeat, she bakes monster themed cupcakes and mainlines caffeine like whoa. Carrie lives in Utah with her husband and three children, where they are secretly a super-team.

Stipe Kalajžić, an architect by trade and comic book artist by choice, decided to leave his job and try his luck as a commercial illustrator. In his spare time he volunteers at a bicycle co-op, repairing bikes and drawing a comic strip for the shop. He lives and works in Zagreb, Croatia with his wife and son. On the Wall marks his full-fledged graphic novel debut.

An interview with Carrie Harris